No staff members are online!

Back to top Skip to content Skip to menu

Back to top Back to main Skip to menu 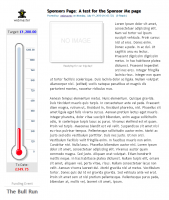 As some of you may be aware, with Pro_News I've pushed the Dragonfly Template system, a variant of the SMARTY system in PHP I'm led to understand, pretty far.

I've templated pretty much everything, except repetitive lists. You might be surprised to learn that I've even added templates to the Submit Article Input screens. The reason is that you can then easily customise those Submit Article screens to remove any unneeded input fields for certain classes of users.

But slowly I discover other things which can be accomplished in the template system. Although unfortunately inserting comments isn't one of them, so the process is a slow one.

But I thought you might be interested in a new template which I've built for my own use, which adds an active graphic. Active in that it is generated entirely within the template based on 2 supplied values.

It even has an extra flourish when the goal amount is reached/exceeded! 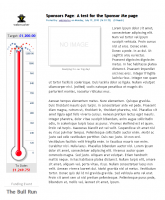 Rather specialised it displays funding as a classic thermometer graphic. Nothing new there. But what is slick is that this was not done in Pro_News per se, just in the template. Rest assured that this is standard Pro_News delivering 2 values in 2 User Data Fields: Target and Current To-Date. The rest all happens in the template.

I could have just displayed 2 values as text... But where's the fun?

I got many of the implementation ideas from a WordPress (?!) snippet by Bob Ray of softville.com released under GPL2. Even more interesting to me was that the equivalent code when done in Dragonfly was shorter, simpler and much, much easier to follow, and thus maintain. Score 1 for DragonflyCMS.

The template is still on my development system. Eventually I intend to deploy it on a site using the new Member's Page facility included in the Pro_News release currently on Beta. This gives you the option of allowing all your members, or a subset group of them, to have their own 1-page (or multi-page) mini-website within your main site. They could display their high score screen shots, publish their own blog, or ... whatever your creativity and/or business model comes up with. You could do this before on earlier versions of Pro_News, but it would have quickly become a chore. With the new release you just set a few parameters (how many pages, and whether they show in Section List), and you're done. Each member's page is auto linked from their Profile too.